Huw Williams asks Nate Bukaty a series of questions in our second Play On interview. 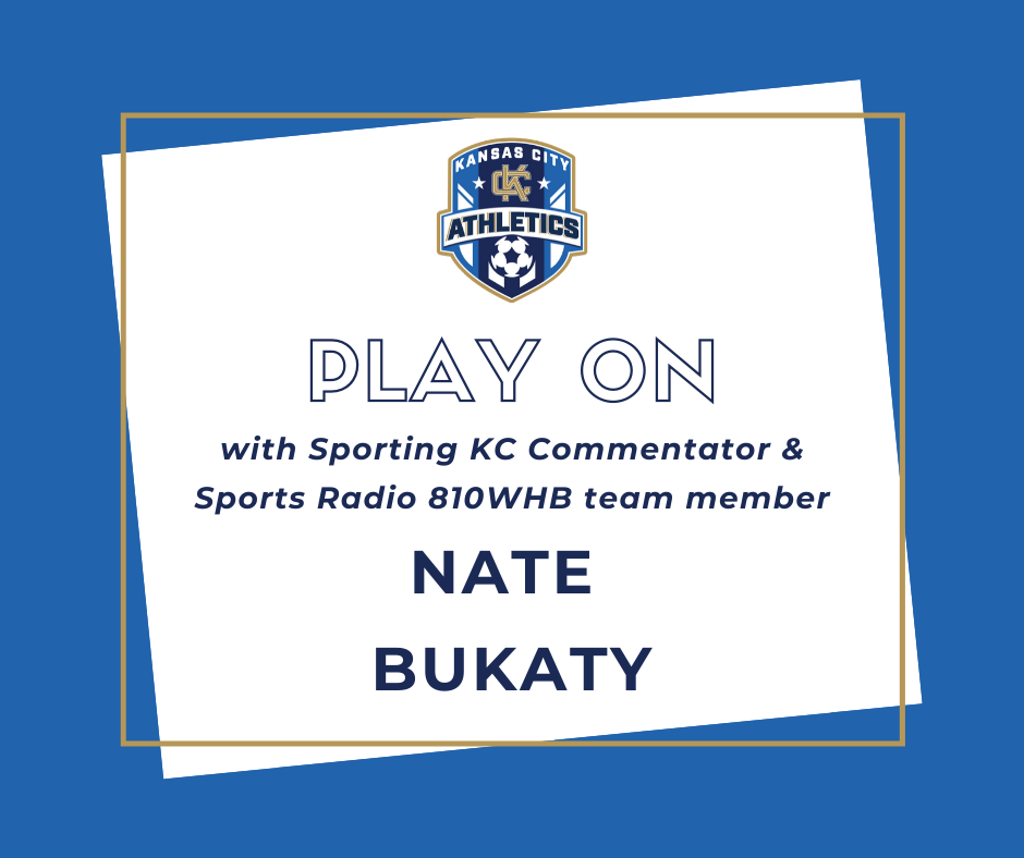 Nate is a sports broadcaster in Kansas City. He is the play-by-play voice of Sporting KC and has been with Sports Radio 810 WHBteam since 2003.

First of all, can you share how you and your family are keeping safe during these challenging times?

It’s certainly a challenge. We are honoring the social distancing guidelines as closely as possible. The biggest challenge we have is that my wife is a healthcare professional (Physical Therapist) who provides essential care for geriatric patients, so she still must leave the house every day and visit her patients. That obviously worries us, but I have so much love and admiration for her and our healthcare workers right now. They truly are heroes through all of this. Meanwhile, at home, we’re trying to keep our kids on a bit of a schedule, just so there is a sense of normalcy for them. We are trying to find a healthy balance of getting some academic work in, while also participating in day-to-day chores and household activities, as well as scheduled time for free play. I’m hoping to keep my kids engaged in getting touches on the soccer ball, as well as getting some good cardiovascular exercise. I know that, when they return to the soccer field, they’ll be glad that they maintained a level of fitness.

So, how did you develop a passion for soccer?

Boy that’s a long story. I started playing soccer at 5 years old. In the early 80’s my family and I attended Comets games on a regular basis. Most of those guys were my heroes: Elson Seale, Gino Shiraldi, Kim Roentved, Tasso Koutsoukos. I remember going to camps that those guys conducted as a little kid. Honestly, soccer was sort of in-and-out of my life over the next 20 years. My parents divorced, and I ended up in a small town in southern Kansas for a few years. I didn’t play from 4th grade until my Junior year of high school, when I picked it back up. I typically only watched soccer during the World Cup every four years. I just didn’t know much about the best leagues in the world, nor did we have a great way to watch those games, even if I wanted to.

It was in 2006, when the World Cup was in Germany, that I really came to understand that soccer was truly my favorite sport. I was traveling with the Kansas City Royals as a radio reporter at the time, and the schedule worked out perfectly for me to be able to watch all of the matches during the day, then go cover the Royals games in the late afternoon/evening. I was so caught up in that World Cup that I decided I didn’t want to wait for four more years to enjoy this sport, and we were just moving into an age where matches from these top European leagues were available on TV and the internet. So I picked a couple of teams in Europe to start watching (Celtic and Arsenal were the teams I chose) and I’ve been obsessed ever since.

Play-by-play is obviously not about just turning up and calling games. How long do you usually prepare for a single Sporting match?

If I have a week to prepare for a game, I typically spend a couple of hours every day preparing for the next game. If it’s a mid-week game, I’ve got to cram more of that preparation time in, so you can add a couple hours to each day’s worth of preparation.

Are there player names that you dread, and be honest, do you hope those players with tough names don’t score a goal?

Let’s just say that I’m really glad that Tua Tagovailoa is playing American Football and not the other kind of football! The fact that soccer is a global sport certainly challenges you as an announcer. One of the biggest challenges I have is trying to decide how far to go to actually attempt to pronounce a player’s name the way he/she says it in their native language. If I try to say Axel Sjooberg’s name exactly the way he does in Swedish, I think our American audience would laugh out loud at me, since I have no idea how to speak Swedish. It’s a tough balancing act.

I know someone who embarrassingly said Boomshakalaka on air. Have you said something during a game that you regretted?

Haha, well, the moment after I screamed “Graham Zusi for President!” I reached down and hit the “talkback” button (this is a button that allows me to talk to my Producer without it going over the air) and said to him “that was so stupid.” I was immediately embarrassed by the call. Next thing I know, it’s in an Audi commercial and it’s playing on national television during every MLS  game. So, I guess some people liked it?

Last season was a tough season for Sporting? What do you think contributed to the struggles?

I think it was all about CCL. You have to remember that the team was already due to have a very short off-season, after playing all the way to the conference finals in 2018. Then they started camp a couple weeks early, and they ramped up the intensity of the start of camp because they had to be ready for a Mexican team in the very first round. They didn’t even get the chance to build up by playing one of the teams from a smaller country in the first round. Then they made it all the way to the semifinals, which was the deepest that any team in MLS made it that year. I firmly believe that it just took a toll on the entire team. Devastating injuries, physical fatigue, mental fatigue. It was all there, and it wrecked the season, in my opinion.

He’s only played 2 games for the club, but how good do you think Alan Pulido will be?

It seems to me that he is exactly what Sporting KC have wanted: a true goal scorer, who has a knack for finishing chances that lesser players would not, while also putting in the work to help the team as a whole. It’s tough to find players who have both of those qualities. The work-rate component is so important to what Sporting KC want to do under Peter Vermes. I know it’s only two games, but the early returns tell me that Pulido has the quality and the work rate to be a perfect fit. He’s proven over the years that he can score goals, and what impresses me the most is that he’s scored goals in the biggest games of his life. He’s won trophies everywhere he’s been, and he’s played a big role in those wins.

We are all very proud of Matt Besler in KC (he outplayed Ronaldo in the World Cup for goodness sakes!). How important is his leadership qualities for the club?

Matt is literally one of the most impressive people I’ve ever met, and that is saying something because I feel that I’m surrounded by amazingly impressive people at Sporting KC on a daily basis. For me, his leadership is more about his professionalism, his daily approach, and the example he sets for everyone. If you attend a “light” training day, in which the players are mostly doing fundamental drills, you’ll see Matt out there focusing on every detail even more than the young players. He could do these drills in his sleep, he’s done them so many times in his life, yet he’s more locked in than anybody. The smart young players see that intensity on a day-in, day-out basis from him, and they’ll strive to be like him.

I know you are a big Arsenal fan, but yes or no, if the EPL does not finish its 2019/20 season should Liverpool be crowned champions?

The bigger issue for me is what happens at the bottom of the table. You could crown Liverpool today and nobody would claim they didn’t deserve it. We all know they were running away with the league. But, if you do that, how do you handle the relegation situation? Getting relegated means a club will miss out on playing in the PL next season, and possibly more importantly to the club, it will mean an absolute fortune in potential revenue that is lost. How do you decide that without letting the season play out? Very difficult.

Man, you are really putting me on the spot there. I have to say that the ultimate bucket list item for me, when I typically think about it, would just be the opportunity to call matches in the World Cup. I’m torn here because calling an MLS Cup for Sporting would be an experience that I could fee a part of. I have personal relationships with the players, coaches, owners, technical staff, etc. It would be so special to get to share that with them. So I guess I have to go with Sporting KC! That’s my home town after all!