Huw Williams asks Sarah Hagen a series of questions in our seventh Play On interview. 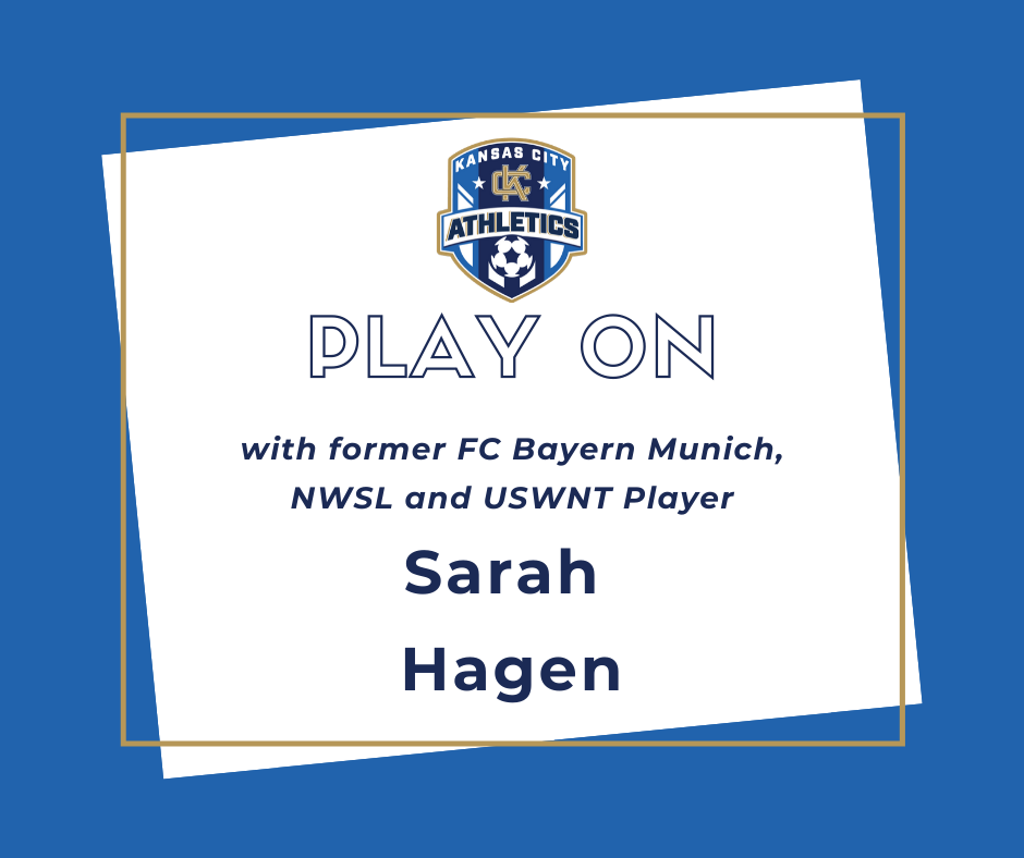 Sarah Hagen grew up playing youth soccer in Appleton, Wisconsin. At age 15, she was diagnosed with a form of ovarian cancer and underwent a series of surgeries and chemotherapy before ultimately beating the disease and making a return to soccer. Hagen attended the University of Wisconsin-Milwaukee where she was a standout player, receiving a number of awards and recognition throughout her four years. She went on to play professionally in Germany for FC Bayern Munich where she won a German Cup. She eventually returned to the U.S. playing for FCKC, Orlando Pride and Houston Dash throughout her career in the NWSL. She won two NWSL Championships while with FCKC. Hagen holds two caps on the USWNT. She recently celebrated being 15 years cancer-free!

1. Let’s start with your nickname! You are known to many as “Apple” because of where you come from (Appleton, WI). When did you first receive the nickname and who gave it to you?

I got the nickname Apple when I was in 6th grade while playing for Brookfield Soccer Association, which is just under 2 hours south of Appleton. There were 2 other Sarah’s on the team so I needed a nickname and one of the fathers on the team started calling me Apple. It’s been quite the nickname because even my teammates at Bayern Munich called me Apple.

2. You have a unbelievably inspiring story of achieving so much success in soccer while at the same time surviving a major cancer scare as a high school freshman. Do you mind sharing some thoughts on your battle with the disease?

Fortunately, my story with cancer is a good one. I can’t tell you enough how much it meant to me to have the support of my family, friends, teammates, and community. From school fundraisers to care packages it didn’t go unnoticed. They helped take my mind off of the bad times and allowed me to stay positive which is what ultimately got me through it all. Overcoming cancer at 15 has put a lot of things in perspective over the years and has shown me that I can overcome anything no matter how big or small.

3. You “celebrated” another year of being cancer free on May 6th, can you provide some words of wisdom for others who might be suffering from cancer or any other illnesses and/or challenges?

I just celebrated my 15th anniversary and it’s crazy to think that it’s been that long already. I think with the pandemic happening right now my story puts things in perspective for people. Times aren’t great right now but better times are certainly ahead. At 15 I went through 3 rounds of chemotherapy, went into anaphylactic shock, had a full hysterectomy and 4 years later I was leading the nation in goals as a freshman at UW-Milwaukee. At 8 years post cancer I was living my dream as a professional soccer player for one of the most historic clubs in the entire world, Bayern Munich.

4. After enjoying a highly successful collegiate career at the University of Wisconsin Milwaukee you decided to play professionally in Germany for one of the most famous clubs in the world, Bayern Munich. Can you share some details on that experience?

My decision to play for Bayern Munich was the best decision I’ve ever made, but also the hardest decision I’ve ever made. I’m an only child and went to college only 2 hours away from home, so I really struggled with the idea of being so far away from everyone. My first contract with Bayern Munich was for only 4 months since I was joining the club during their second half of the season. In those first 4 months we climbed the league standings, qualified for the German Cup, and went on the win the 2012 German Cup versus FFC Frankfurt. I ended up staying for another 2 years where I got to play with some amazing players from all over Europe, and watch all the men’s home games (including the 2012 Champions League final at Allianz Arena when Chelsea beat Bayern). It was an unbelievable chapter in my life and I am so thankful that I got to experience it.

5. You were capped by the full national team for a couple of games in 2014. What do you remember most about those games?

Those games were played during the Algarve Cup in Portugal against Sweden and Denmark. I got minimal minutes but I felt like I made the most of them. Biggest thing that I remember from my first cap was I subbed on for Abby Wambach. To enter the field to replace a legend like her was pretty special. I don’t normally get nervous as a player, but that moment of entering the field with the US jersey had  my emotions all over the place.

6. Are there any games which specifically stand out to you?

Obviously, the German Cup final in 2012 versus Frankfurt. We won 2-0 and I scored the first goal with my head off a corner kick and assisted on the second. We played in front of nearly 17,000 fans, which was by far the most amount of people that I had played in front of at the time. My parents, aunt, uncle, and 2 cousins were in the stands that game as well so it was a very memorable match for everyone.

7. You have retired from playing the game now. What do you miss most?

By far, I miss the girls that I played with. It’s great to be able to see what everyone is doing on social media but it’s very different from living together, doing team meals, traveling for away games, and the locker room talk. FCKC was probably the best group of players that I’ve ever played with both in talent and team chemistry. Aside from winning back to back titles, we played some great soccer but also had fun doing it. Ain’t no city like Kansas City!

Since retiring from soccer a few years ago I’ve gotten into a few different things. I was involved with both high school and club soccer in the Orlando area however, now I’m in marketing for Chipotle’s “Real Food For Real Athletes” program. I don’t know how long this will last, but if I’ve learned anything from my career it’s opportunities will come and sometimes the most difficult decisions are the most rewarding.

9. No intention of getting into the salon industry? Some major haircuts needed after the shutdown is lifted!!!

My parents have owned their salons for the past 30 years and are divided when it comes the idea of me taking them over someday. I’ve been around the salons for most of my life and it would be nice to get back home but I don’t know much about cutting hair. Although desperate times during COVID-19 required me to color my moms hair, I may have to rethink what my future holds?!

10. I always finish these questions with a tough “would you rather” so here’s yours - would you rather the Packers have a great season next year, but lose in an embarrassing manner to the Bears or have a poor season and humiliate the Bears? (Side note they don’t win the SuperBowl in either scenario as the Chiefs will repeat!)

First off, I was at the game this past year when my Green Bay Packers came into Kansas City and beat your Chiefs. But to answer your question I think I would take the successful season with a bad loss to the Bears. As much as I hate the Bears, I couldn’t stand the thought of watching a losing season.