Huw Williams ask Dave Stewart a series of questions in our eight Play On interview. 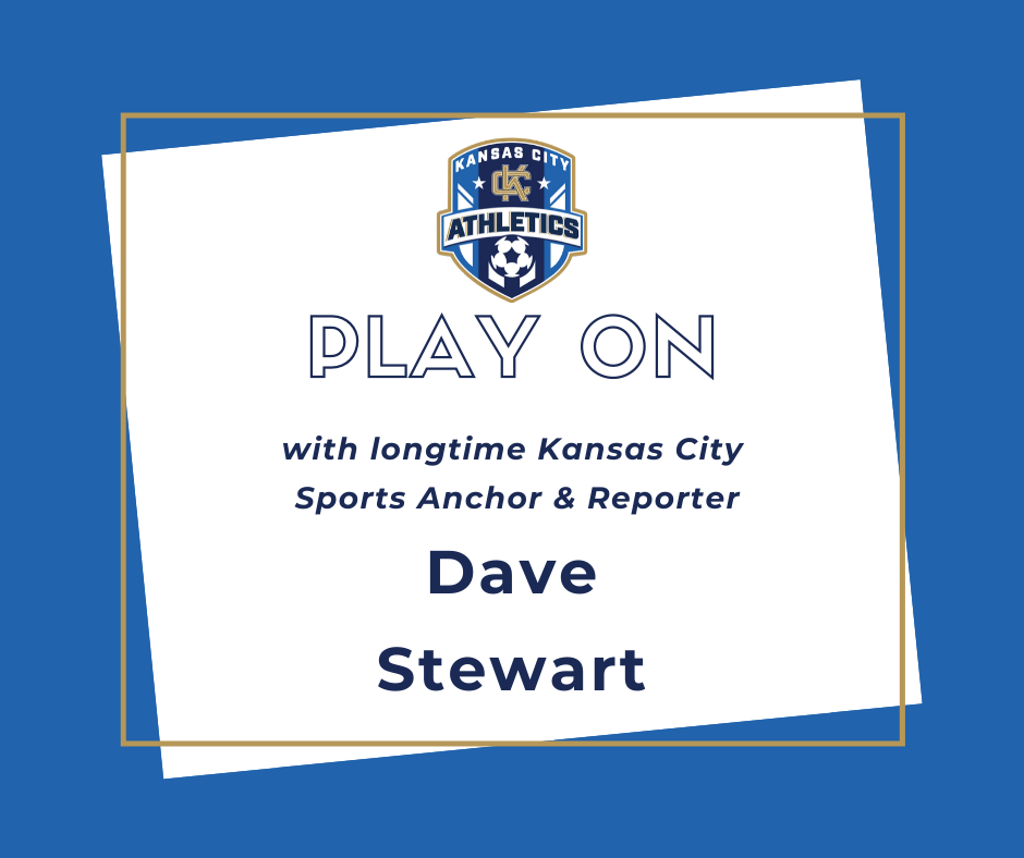 Dave has been in the Kansas City sports media industry for six decades covering an extensive list of athletes, games and sports.

1. Dave, as a proud Kansas Citian, who would you consider as the top athlete from KC (born and bred)?

Tom Watson, PGA golfer. I can't think of anyone close to his accomplishments.

2. Ok, how about your Mount Rushmore of athletes who have played for KC sports teams?

3. You have worked in KC TV/Radio in 6 different decades. Which interviews stand out among your favorites?

Muhammad Ali was a thrilling one-on-one. We were late to the press conference and interviewed Ali outside his limo. Interviewed Henry Aaron a couple times-- not super friendly, Bob Gibson twice-- intense, intimidating. George Foreman-- big baby, said I shook his hand too hard. Dick Butkus-- gentle giant. Larry Brown, KU coach, was probably my fave coach interview. Whitey Herzog for the Royals would be that conversation. Both would answer any question. Dick Vermeil and I did Chiefs' pre-season games together. I loved his accessibility when he coached the Chiefs. I considered us to be pretty close. I could tell him anything-- and did. Dick Howser was a really good guy but not a great interview.

4. You joined Metro Sports in 2001, and you played a key role in creating a cable station which provided outstanding local sports programming. With so many achievements at Metro Sports, what are you most proud of?

I've always enjoyed high school athletics the most, giving those kids some exposure. It's the purest level, by comparison. I like to stay connected with them as they become leaders/adults. Nathan Scheelhaase, Rockhurst HS QB-Simone Winner would be at the top. Assistant coach at Iowa State, record setting QB at Illinois. Love that kid/man/coach. Darren Sproles would be another. We stay in pretty regular contact by text. He can tell me things in confidence and know it's off-the-record. He has a legit shot at Pro FB Hall of Fame, top 5 in career all-purpose yards. Another Simone Winner. Better person than player. That's saying something.

5. Pick your starting line up made up of the 1985 and 2015 Royals Championship players only.

6.You covered the early Wiz/Wizards teams and traveled with the team for away games. What are your memories of those early days of the team and the MLS?

It was pretty relaxed with Ron Newman as HC. It wasn't uncommon to go to training and have Coach look like he was at the beach, working on his tan. Players were pretty normal people, not necessarily a star-studded league. The stars were always very approachable-Meola, Preki, Alexi, to name a few. Lalas was a party animal while in KC. Meola and I were close. Enjoyed him personally and professionally. Freakishly athletic. Preki was a little eccentric and super talented, great competitor. Loved his corner kicks at Arrowhead, working around the storm drainage grids. In general, I loved their passion for the sport.  Older players were typically on their last leg, career wise. I sort of enjoyed Arrowhead contests although 10,000 in an 80,000 seat stadium looks horrible. It was nice to spread out and sit wherever you wanted. Parking lot pre-games were fun with all the kid activities. Lamar Hunt always told me supply/demand was a huge factor to attract fans and draw interest. The current Park proves he was right. It's not easy to get a ticket. That's a positive.  In the early 2000's, travel meant bad, cheap flights. They were actually really fun times-being at/near the ground floor. Meola, Vermes, Burns and I always ate dinner together the night before games on the road. I found a great Mexican joint in San Jose. One time, I took my son on a road trip. Tony introduced him to Landon Donovan afterwards. Pretty big thrill. I always interviewed Bob Gansler at the pool the morning of the game. I also begged him to let me come to the team meeting on game day. He considered it, but always declined. It was worth a shot. After the team won it's first title, the Wizards had a celebration in a tent outside Arrowhead. It was my day-off but I volunteered to work on my day-off at Ch 9 to make sure it was covered with a  live shot.  We need to be there-whether I got paid or not.

I'd probably go Big Tones, but they are similar. Crazy, fearless, like GK's should be. I'd go to war with both. Meola probably had an edge with his arm, distributing out of the back. A baseball player bonus. Free kicks--maybe an edge there, too. As I recall, Lalas is the one who knocked out several of his teeth with an elbow, friendly fire. It happens. I wrote a magazine article on Jimmy. What a personal story. And character. He was very open about many personal, intimate things in his life. I was proud of the article in 435, now Kansas City magazine.

8. You also covered, announced and supported FCKC. What are your thoughts about that team?

I loved, loved, loved being associated with the women's team. Reminded me of the Wizards'/MLS early days. There were few media restrictions. Access to players was great. I enjoyed going to training at OP just to watch them work. The talent on FCKC was incredible if you think about all of the USWNT talent. A Rod, Cheney, Becky, HAO, Barney. What studs. I was probably the closest to Heather. We just clicked. I always encouraged her to pursue broadcasting when she was done. Such a good communicator and on-air presence, a ray of soccer sunshine. I'd text her when she was on-air during FOX World Cup shows and she would respond during the shows. I thought that was funny. I really wish the team would've been able to put down roots here. A shame they're gone. It was an honor to know them, cover the team, and give it needed exposure. So proud of Vlatko's global ascension. I'll never forget literally 'catching him' at a practice at Swope. When I asked Vlatko the last time he ate, he couldn't remember but tried to include drinking coffee as a meal. The girls really respected him and GM Huw Williams, prince of Wales. I put in way too much work for the broadcasts and probably cared too much, but that's the way I roll. I thought it was a blast.

9. As well as being a reporter and sports presenter, you also were a soccer parent to a successful youth and collegiate player. What advice would you have for young parents starting the journey?

Relax. Let your child enjoy the game, training, competition. I found it easier as I got older with kids playing at a higher level.  If your son/daughter is driven, cool, allow them to be the main force in their pursuit. You can't want it for them. There's obviously a balancing act of encouraging them to put in the work, and putting them in positive situations with good teams and qualified coaches, but your child has to want it. When it came to college soccer, to me, speed and power were more important than having great ball skills and six to-go moves. Have one or two that you can always rely on to shake a defender. Being able to do rainbows and maradonas mostly looks good for your Tik Tok videos. Enjoy, encourage. Shush up. I took pics of my kids from youth soccer through college. It was a great way for me to share pics with other parents and it kept me quiet. I know. It's hard. Try. Be positive. Live and learn. Parenting is hard. Strive to parent in a way your kids will want to repeat, not reject. George Brett's dad was really hard on him. George was Mr. Happy with his boys. I never saw George want anything but to let his kids have fun competing.

10. I always try and finish these questions with a tough would you rather question, so here’s yours - Would you rather have free pumpkin spice coffee during the thanksgiving period or free Taco Via meals after KU games?

It's Taco JOHNs (east side of Lawrence on Haskell is the best-- that crushed ice!) and Taco Bravos. And that would be my choice-- having YOU buy me food. And Potato Ole's and a churro for dessert. But I do like pumpkin anything. How 'bout both, Mr. Big?